What do global figures on disability reveal ? 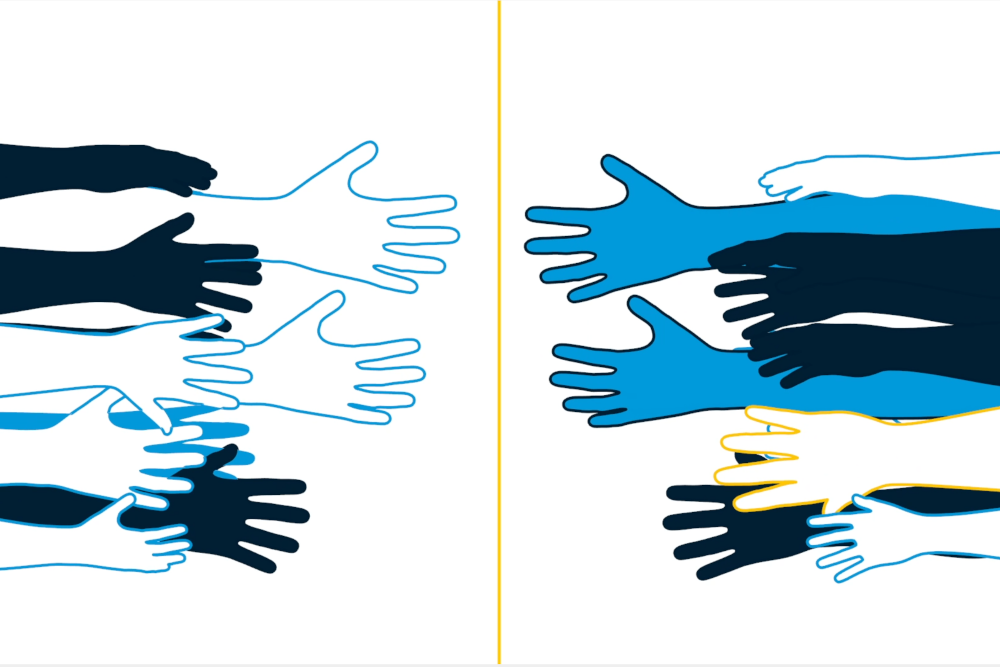 Figures are relevant indicators to understand and measure health issues. Concerning disability, the question of access to technical aids is becoming crucial, particularly in a context of unequal access to healthcare, while the prevalence of disability is still increasing.

In order to better estimate the needs of people with disabilities, we wanted to draw up an overview of key figures on this subject.

According to the World Report on Disability published by the WHO and the World Bank in 2011, more than 1 billion people live with a disability and nearly 200 million of them have very severe functional difficulties. This is 10% more than in 1970, and it is estimated that more than 2 billion people will need at least one assistive product by 2030.

How can this be explained? These are the consequences of an ageing global population and an increase in chronic health conditions. Indeed, older people have a higher risk of disability, and diseases can lead to disabilities, such as diabetes, which increases the risk of amputation by a factor of 8.

This WHO report has become a reference and has helped to establish an  overview of disability in the world as well as a a better understanding of the associated issues with health care.

However, even today it is still complicated to obtain complete and precise data on disability.

Incomplete data on a global scale

Despite many studies on the subject, it is difficult to get figures on disability in the world in 2021. There is no agreement on definitions and little internationally comparable information on the incidence and distribution of disability. This makes it difficult to establish a disability global observation in figures.

In addition, there is a very significant lack of care assistance and support services for disability and this deficiency is more observed in developing countries.

Indeed, we observe strong disparities across the different regions of the world.

80% of people with disabilities and 95% of children with developmental disabilities live in low- and middle-income countries (LMICs).

However, access to technical aids is more difficult than in high-income countries (HICs) because of a shortage of labor in the area of assistive technology. In consequence, people with disabilities are not sufficiently taken care of, which can lead to their exclusion, isolation and poverty. The lack of health personnel and specialised structures in many regions prevents the identification and consideration of these people as disabled persons.

As a result, the figures may sometimes be underestimated.

During our researchs, we found huge discrepancies between different reference sources and it is impossible for us to verify their reliability. There are paid market studies (costing several thousand dollars) which may contain more accurate figures.

9 in 10 people in need do not have access to assistive technologies, partly due to the high cost of these products. Half of people with disabilities cannot afford health care. It is also explained by an absence of public health policy, lack of awareness, availability, trained personnel, financing.

The lack of access to healthcare is generalized to all types  of disability :

– 466 million people globally experience hearing loss and only 10% have access to hearing aids.

Unequal access to technical aids does not spare amputees.

Focus on few figures about amputation and neuromuscular diseases

At ORTHOPUS, we design 2 ranges of solutions dedicated to the upper limb : prostheses for amputees and assistive robotic devices for people with neuromuscular diseases and limited mobility. We will therefore focus more precisely on the figures relating to these types of disability. 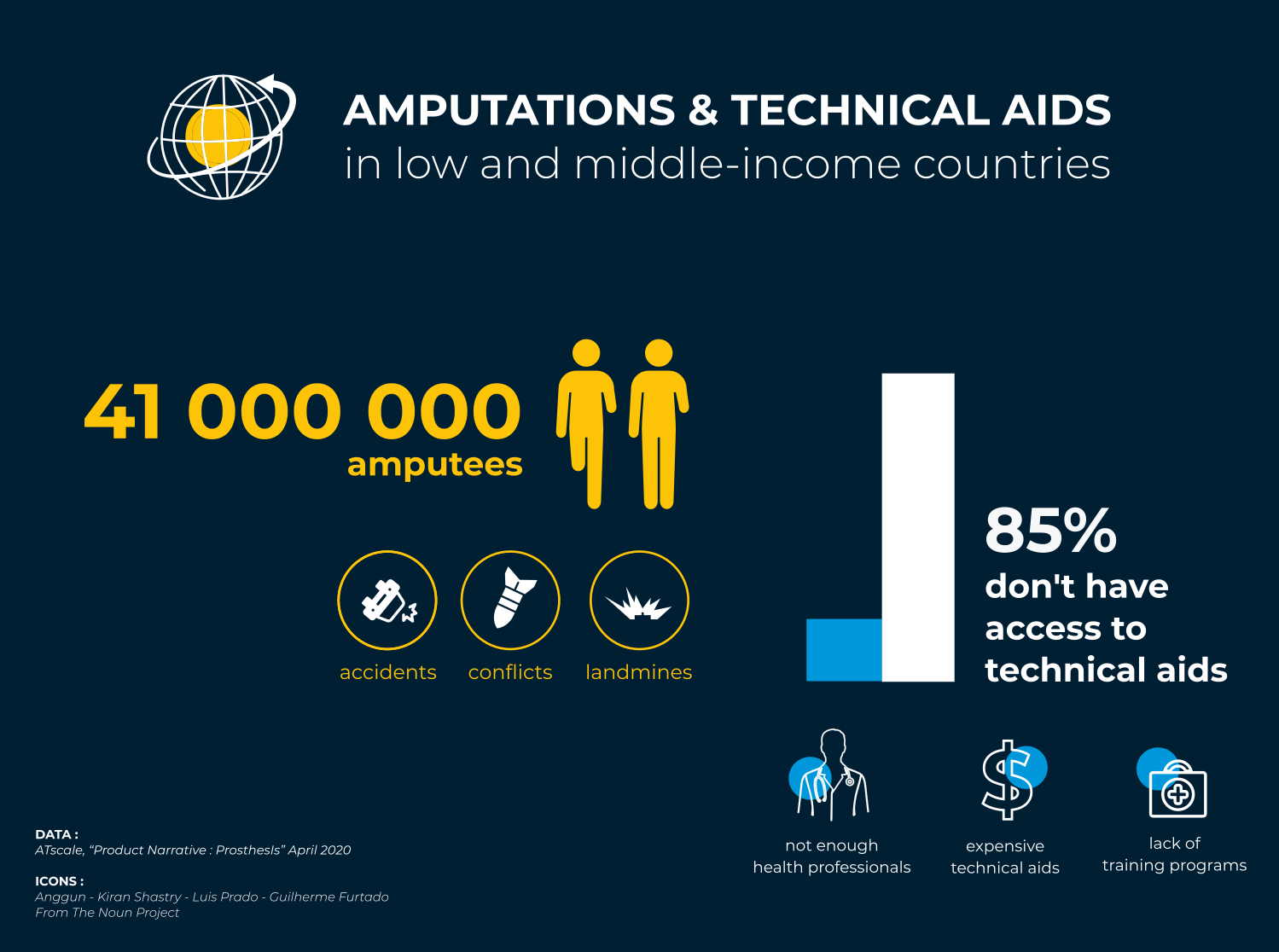 An estimated 1.5 million people are amputated each year worldwide, and need access to prostheses. 15% of these amputations affect the upper limb.

65 million people live with an amputation and 64% of them live in LMICs.

The main causes of amputation are vascular diseases (54%), including diabetes and peripheral arterial diseases, traumas (45%) and cancers (less than 2%).

In high-income countries, about 80% of amputations are caused by complications of blood vessel diseases and diabetes. While in developing countries most amputations result from trauma due to road traffic accidents, injury caused by currents or past conflicts (for example due to landmines). 40% of amputations caused by trauma are upper limb amputations (19.6% unilateral and 19.1% bilateral).

The WHO estimates that only 5 to 15% of amputees in need of prostheses in LMICs have access to solutions. In addition, there are not enough health professionals, there are just over 2 prosthetists/orthotists per 1 million people in HICs, while LMICs all have less than 1 prosthetist/orthotist per 1 million population and 75% of them have no prosthetics and orthotics training programs.

Nevertheless, Eurordis, a non-profit alliance of rare disease patient organisations, estimated in 2007, that 200,000 people suffer from neuromuscular diseases in Europe. If we extrapolate these data to the global population of 2021, this gives a rough estimate of just over 2 million people with neuromuscular diseases worldwide.

Thanks to these figures, we realize that inequalities in access to technical aids persist : more than 1 billion people and their families are affected by social inequalities they imply. Despite the extraordinary work of the WHO and other organizations dedicated to disability, the real needs of people with disabilities around the world are still too poorly estimated. At ORTHOPUS we want to contribute to improving the quality of life of as many amputees and people with limited mobility as possible.

Struck by this observation of a strong lack of access to assistive technologies, particularly in low- and middle-income countries, ORTHOPUS decided to develop accessible and affordable solutions dedicated to physical disabilities. Our mission is to provide access to medical solutions for the greatest number of people, to create an original business model and to shake up the global medical devices market.